With the first recorded race taking place at Fairyhouse in 1848, it is fair to say that the track is one of the stalwarts of Irish Jump Racing, playing host to the Irish Grand National each year since 1870. Notable winners of the race include Desert Orchid who carried top weight to victory in 1990. It also has flat racing through the calendar and it has a sole Group 3 race on its July card, but without doubt, it is known as a national hunt course.

The county Meath track is situated in the countryside only 23kms from Dublin and Bus Eireann provide a special bus service that runs from the capital to the course on race days. Fairyhouse is known for its jumping festival’s, most notably its 3-day Easter weekend festival, as well as its winter festival in December, which contains 3 Group 1 contests and attracts a host of stars from both sides of the Irish Sea to the course.

Ticket prices vary in accordance with the type of meeting, as follows: 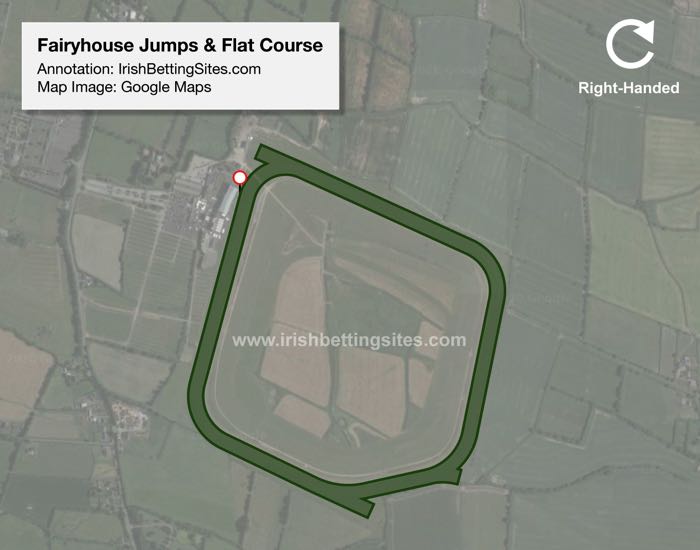 A wide, square shaped, galloping, right handed track sums up the 1m 6f circuit at Fairyhouse. There is a steadily rising hill from the end of the stands to the entrance to the back straight, followed by a descent throughout the back section of the course. The three furlong home straight is slightly uphill but by no means the most challenging finish in the country. On the chase course, there are 11 obstacles per circuit and a run-in measuring around a furlong in length.

The fences on the chase course are noted as some of the stiffest in the business and you don’t want to arrive at the course with an unsure novice. Those unconvincing types are sure to be caught out by some of the jumps, particularly those situated in the back straight. Being within touch of the lead when taking on the final two jumps is of pivotal importance as the short run-in rarely allows for a serious challenge from deep.

Fairyhouse doesn’t hold five furlong races but data taken from six and seven furlong events shows us that a decent degree of draw bias exits. Unsurprisingly, it’s those closest to the inside rail that fair best over both distances as they are well placed to take on the sharpish home bend on the inside, covering as little ground as possible.

A low numbered stall is no guarantee of success though as any hopeful horse in the bottom third of the draw must also be happy riding prominently. Failure to do that will see them boxed in by the rail as there’s usually much congestion here. Without a clear run, there’s little jockeys can do other than rue making a sluggish start.

Over long distances there’s little bias to speak of, in terms of both pace and draw. The uphill nature of the final three furlongs can see the fields stretch out a little in longer races with some jockeys perhaps setting off a touch too soon. With a few more gaps as a result, hold-up horses have the space to make a late surge, although on the whole, prominent runners still probably fare a touch better than the rest.

Fairyhouse is a mixed card track that hosts 20 meetings over the course of the year – the most notable of which is without doubt the Grand National meeting held over 3 days on the Easter Weekend culminating with the Grand National itself on Easter Monday. It also holds a well-regarded card at Christmas with three Grade 1 contests.

Fairyhouse has a number of rooms allowing clients to entertain 50 to over 300 guests. Some of the private rooms in Fairyhouse also interconnect offering facilities for up to 1,000. All rooms include Tote and Bar facilities and TVs showing the day’s racing. Group bookings start at €45 per person.

For single patrons, you can avail of the self service restaurant providing both hot meals and healthy snacks on course or the Bobbyjo Bistro located at the back of the main stand.