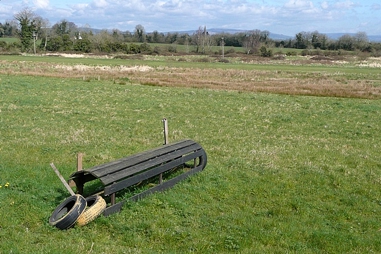 With close proximity to Limerick City, the Limerick racecourse is easily accessible via the N20 motorway. When it opened its doors in 2001, it was the first track built in fifty years. The course is best known for its summer evening meetings, which always feature live music for patrons after racing.

Limerick city is a vibrant and growing area in the south west of Ireland, best known as the home of the Munster Rugby team. Boasting wide open spaces and some of the most modern amenities you will see at a track in Ireland, it creates a great family atmosphere during an evening meeting at the venue.

Limerick train station is serviced from Dublin and Cork and is located just 15-minutes from the track. Additionally, Bus Eireann run a bus from Colbert Station to the course for €3.50 single and €5.50 return on race days.

Limerick is a right-handed track that is oval in shape featuring several large undulations during its 1m 3f circuit. There is a steep climb all the way up the back straight, which includes five fences on the outer chase course, followed by a downhill run to the 3 furlong final straight. From this point on, there is a bit of an upward climb inside the final furlong after the last fence.

The type of flat horse required at Limerick is very much ground dependant. On faster ground, plenty of pace is needed, because once they reach the top of the hill it is not that much of a test and not many tend to make ground from the back of the pack.

However, if the rain comes and the track softens out, that hill severely takes its toll on the horses and you will see animals who are ridden from off the pace come to the fore inside the last couple of furlongs in the slightly rising ground.

As in longer flat races, National Hunt horses generally need to be handed a breather during the climb up the back straight too. After tackling the incline it’s important that jockeys don’t immediately put on the burners as they’ll usually end up paying for it during the final furlong. The fences, of which there are seven to a circuit, are generally quite fair but if any are going to cause horses problems it’ll be one of the final two, especially when the course is riding on the sticky side.

NO DRAW BIAS TO REPORT

No shorter sprint races take place at Limerick and so there’s only seven furlong and one-mile starts to form our draw bias investigation. Both races begin near the start of the back straight, with one mile contests originating from a small chute that peeks out from the oval course. Across both distances there’s not much in the way of compelling evidence to suggest low, mid or high drawn runners carry any sort of advantage regardless of conditions or field size.

Limerick stages a total of 18 flat and jumps meetings each year with the biggest race being The Munster National worth €100k in October. Other major meetings include the four-day Christmas Festival from St. Stephens Day with a Grade 2 novice chase being the feature race during that particular festival.

Packages are available at the Panoramic Restaurant at the course and prices vary depending on the meeting and can be viewed on the course website in the lead up to racing. 13 Private Suites are available for groups between 30-120 people starting at €45 per person.

Available to all patrons are the Munster Suite, Tote Hall, and the Owners and Trainers Bar that provides a variety of hot meals, bar food, and fast food options and drinks on any given race day.